I was dreading planning My 13 yr olds Birthday Party! Thanks to simple foods, a few things ordered off Etsy, the Game Truck and screen printing our own t-shirts, this party was a hit! And it didn’t wear me out just planning it. I’m sharing ALL the details, so keep reading!

He turned 13 and had 12 boys over. I knew that they would require more than the typical pizza and I knew I needed something that didn’t require silverware because I knew they wouldn’t use them anyway. I heated up a bunch of frozen finger foods because we all know teen boys are not picky.

13 year old boy birthday party ideas are hard to come by, and birthdays for boys can be so hard to plan, but this one is pretty simple. This Neon Birthday Party for Teens is another great idea!

Winter birthdays in the Pacific NW can be tricky!  Like many 13 yr old boys, he and his friends are into gaming. Video gaming.  They all play together either in our basement or online via the Xbox.  I love that he can play with his cousins in Utah whenever he wants.  The Game Truck was PERFECT to wrangle his friends for a couple of hours.  These trucks have 4 large screen TVs and all game systems and games any kid would want. The kids stay IN THE TRUCK for 2 hours.  That’s the part I love!  Who needs a dozen 13 yr olds running around your house?

I HAD to make this party festive somehow. I had to promise that I wouldn’t decorate with streamers, banners, balloons, a fancy cake or cupcakes …….that didn’t leave too much wiggle room for party planning fun.  I found a few goodies on Etsy for Modern Warfare that suddenly made my son stand up straight! Let the theme planning begin!!!!  These invites were so cool, even the boys thought so.

We found this image of a grenade, that I guess they use for the game. 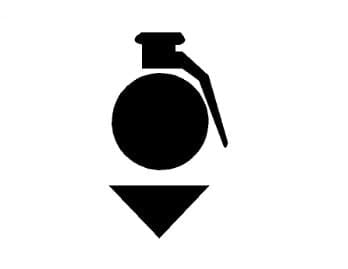 I called my friend who could get me some t-shirts for a good price and decided to use my Simply Screen Silk Screen kit I received a few months ago.  I was able to knock out 16 t-shirts in 30 min.  I wasn’t sure if the boys would like them…..so you can imagine how thrilled I was when they all put them on. 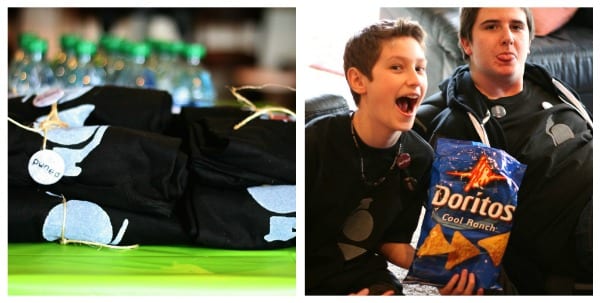 I tried hard to make the table look like an afterthought………because party tables are not cool when you’re 13.  I rolled each t-shirt, placed the modern warfare pin on it and tied with some twine.  The pins were also ordered off Etsy. There were a few sayings from the game like “no noobs”  “pwned” “game on”…….

I downloaded an image and made my own water bottle wrappers.  This not only looked cool, but it was a genius way to not serve soda.  As far as the cake, again…….I ordered an icing top off Etsy.   Etsy is my new BFF. I had the gal that makes my Thanksgiving pies, make his cake.  (because we all know I’m not going to make it)

I served Pizza and the Tyson Any’tizers.  Let’s just say they were gone in about 3 min.  After inhaling the food and since it wasn’t raining, they headed outside for a little basketball. 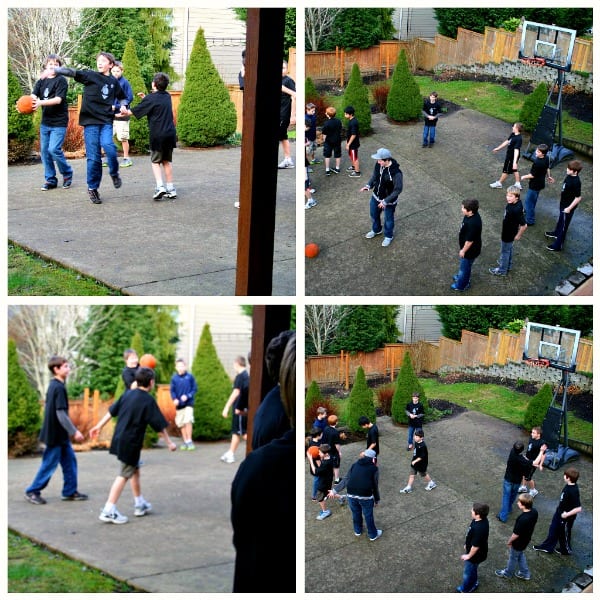 I had to practically threaten to not feed them anymore to get a few group shots.  As you can see…….it was like herding cats. 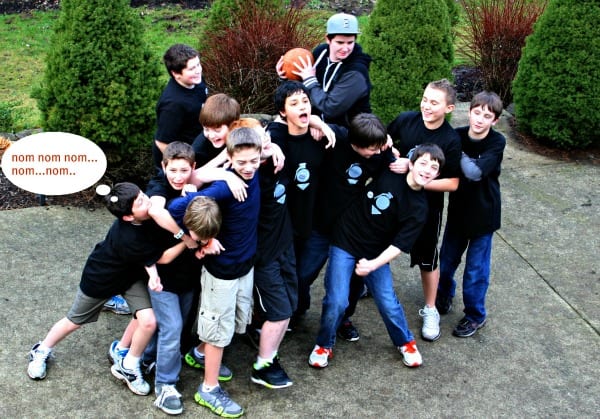 After holding a piece of pizza up, they gave me this shot. 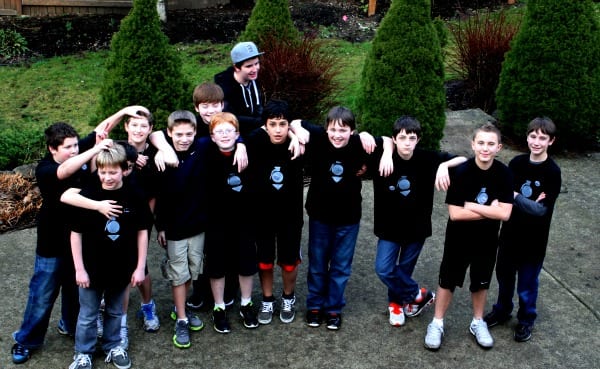 Thank goodness the Game Truck arrived and it was time for me to watch a movie and for them to be locked inside playing games for 2 hours.  (they really weren’t locked in, but I pretended they were) 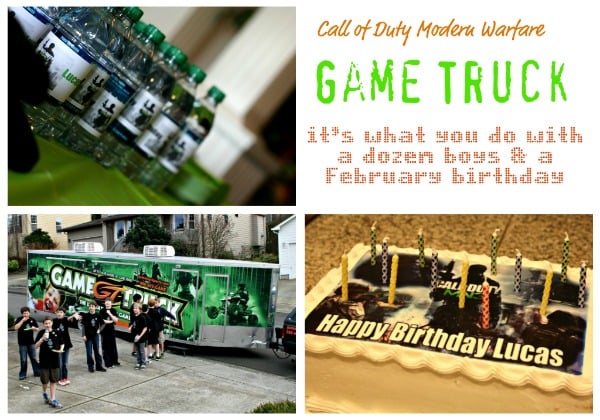 And just so you know……13 yr olds don’t want a party table, but they do want their candles lit for birthdays….. and to have their friends sing Happy Birthday.

These links are affiliate links. This costs you nothing extra, but if you did decide to purchase, I would receive a small %. Thank you for your support. 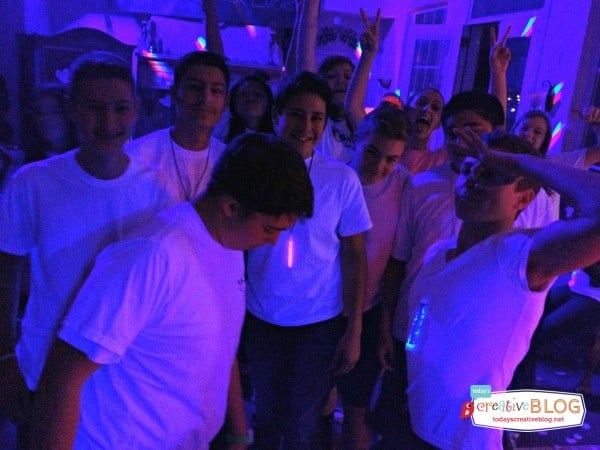 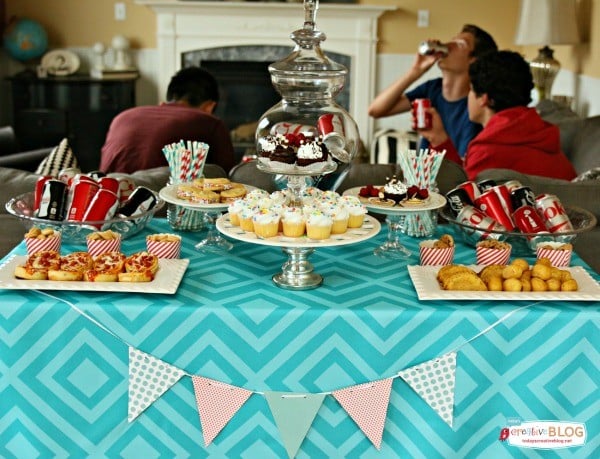 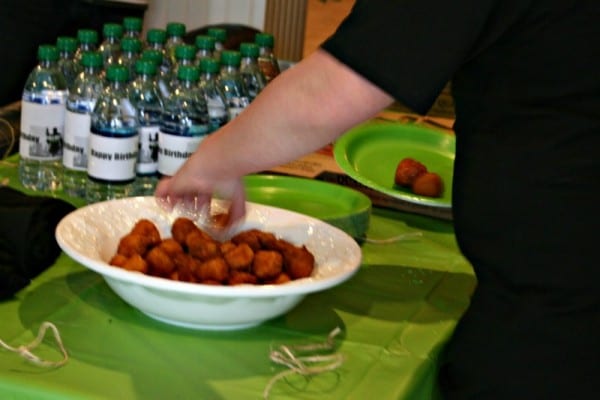 Owner/Founder at Today's Creative Life
Kim is the owner and founder of Today's Creative Life where she has been dishing up a creative slice of life since 2007. Today’s Creative Life brings simple and creative ways to celebrate the everyday. You’ll find practical, stylish and clever decorating ideas, DIY projects, delicious family-friendly recipes, free printables, holiday inspiration and more! Life is more fun when it's creative!

Latest posts by Kim (see all)

Kim is the owner and founder of Today's Creative Life where she has been dishing up a creative slice of life since 2007.
Today’s Creative Life brings simple and creative ways to celebrate the everyday. You’ll find practical, stylish and clever decorating ideas, DIY projects, delicious family-friendly recipes, free printables, holiday inspiration and more!
Life is more fun when it's creative! 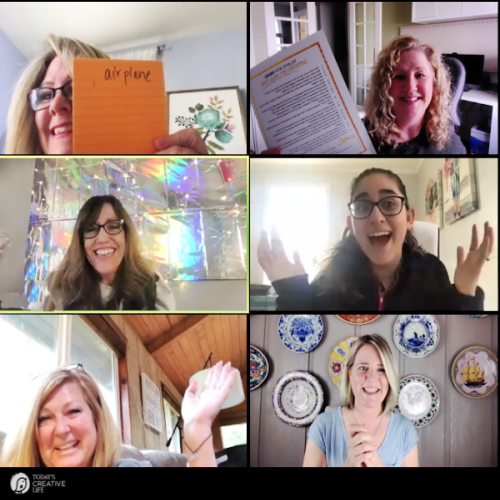 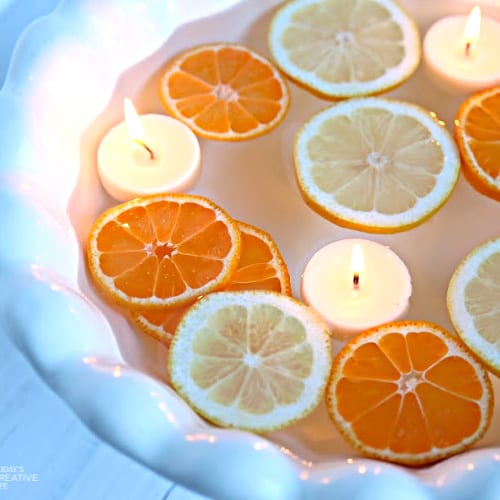 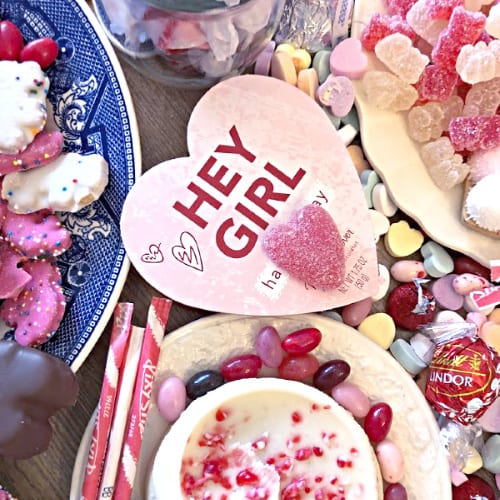